Most research cruises leave their moorings in the water for months or years, but not these guys. They’re recovering a mooring they just deployed seven days ago. After it’s back on deck, they’ll pull off the data and will re-release it again in a few days. All in the name of science!

The instruments on this mooring have been gathering data for seven days at a unique hill on the Tasman slope, which we’re calling “the bump” (more on this later). The team has been actively profiling this area with the CTD for days, and they are thrilled to get a first glimpse of this data to add to the analysis.

Jonathan Nash inspecting the acoustic releases, which tether the mooring to the anchor. Credit: Julia Calderone.

Recovering a mooring is not much different from lassoing an animal. Except this “animal” weighs thousands of pounds and can be several miles long. First, they release the entire mooring from the anchor that tethers it to the bottom of the ocean by sending a unique encoded sound pulse to the “acoustic release”, a super-strong link that holds the mooring to the anchor. This audible passcode, sent from the ship (potentially from miles away), commands the release to pop open and relinquish the line, sending the entire package to the surface. A beacon at the top of the mooring pings its location via satellite for tracking as it ascends. Since this mooring was 2000 meters deep, it took about 30 minutes to rise to the surface.

Once the buoy surfaced, the captain, his crew and our chief scientist, Matthew Alford, spotted the mooring’s buoy by eye. Had it been night, they would have used its satellite transmissions and flashing lights to locate it in the dark. The Captain then navigated the boat to glide just to the side of the package without letting its trailing tail of instruments get pulled under the ship and tangled into the ship’s propellers. The mooring crew, waiting patiently aside with hooks and tag lines, pounced and wrestled the thousand-pound buoy around the side of the boat as it approached. Then they slowly and deliberately pulled hundreds of meters of line in and removed each of the instruments, one by one. Over the next few hours, the data will be downloaded, processed and analyzed to get a first glimpse at some amazing underwater waves. Stay tuned. 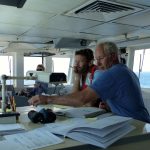 Matthew Alford and Captain Tom Desjardins are planning the route to recover the buoy without entangling the mooring line in the ship. Credit: Julia Calderone. 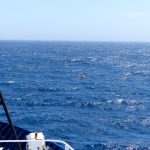 Tracking the red buoy from the bridge as it bounces around the waves. Credit: Julia Calderone. 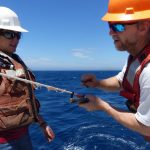 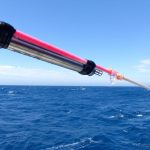 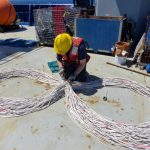 Bob Hallberg lays the mooring line in figure eights to prevent it from getting in a wuzzle (that’s ship talk for getting knotted). Credit: Julia Calderone.

The Tasman Tidal Dissipation Experiment//Supported by the National Science Foundation