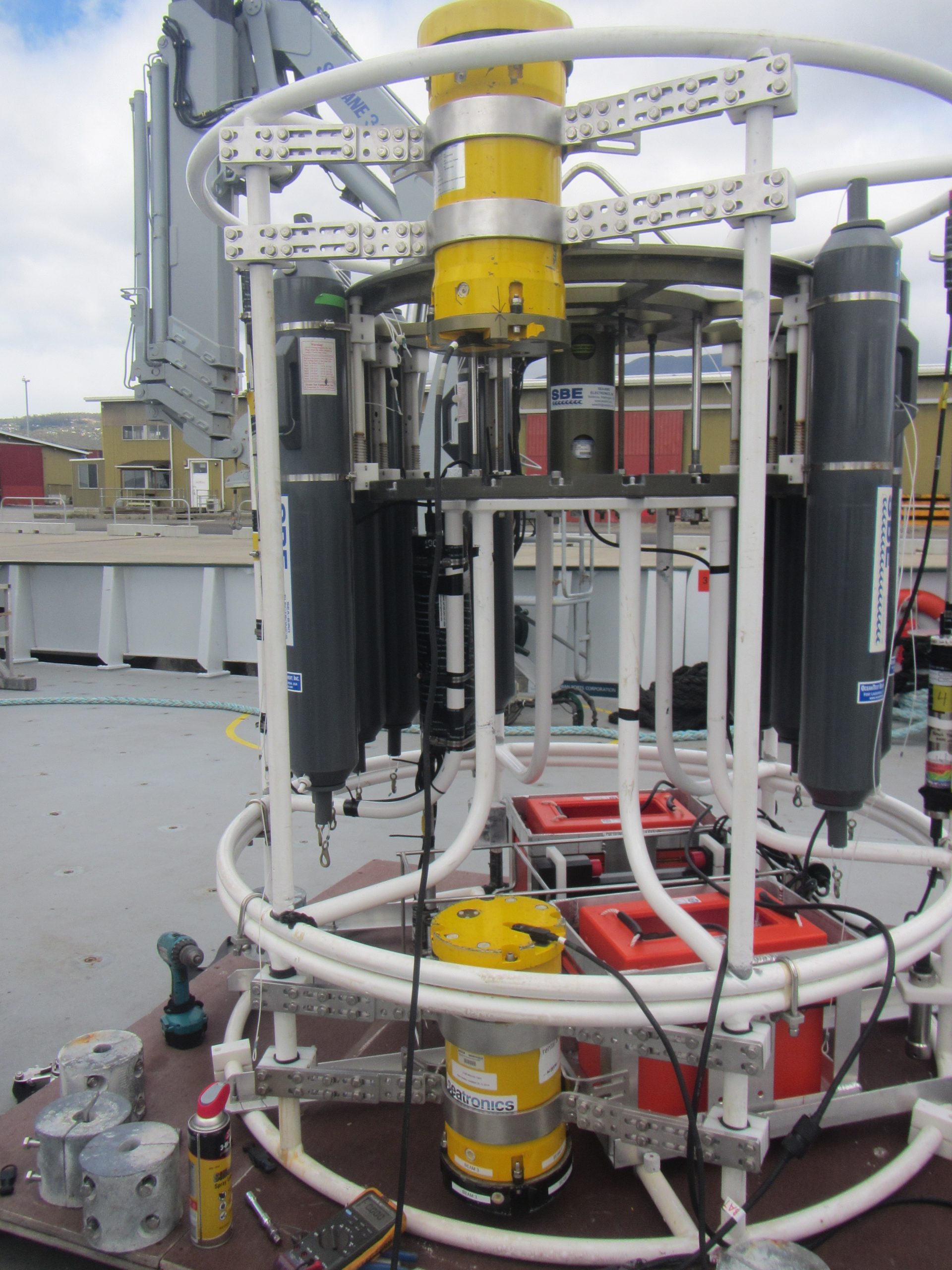 The LADCPs in their positions on the CTD rosette. SOI/Judy Lemus

Good scientific data is wonderful, but data is not very useful if it isn’t accurate. The tricky bit about using the ADCP on this cruise is that it will be attached to the CTD rosette. This is called a “Lowered” ADCP or LADCP. The CTD carries batteries on it that have metals and electrical currents that can interfere with the internal compass of the ADCP, which would reduce the accuracy of the flow direction measurements. Also, moving the ADCPs up and down in the water column (as is done with a CTD) can be hard on the ADCP sensors. The rosette will actually carry four ADCPs – two primary instruments (one pointed upward and one pointed downward) and two alternates as backups in case the first two stop working properly.  Today the science team prepped and calibrated the ADCP for use on the CTD – somewhat tedious but very critical work!

Science and ship crew tilt and twirl the CTD rosette to calibrate the LADCP. SOI/Judy Lemus

The calibration requires putting the rosette through a series tests that tilt and turn the instrument several times. The tilting is to help adjust for position in the water and ensure the compass knows what is “up”. The turning is to calibrate the compass heading to true North. Each of these must be done three times to get the best calibration, which gives the ADCPs the best accuracy. But wait, there’s more! All of this must be done before the ship leaves the dock and before the instruments ever touch the water. So the whole rig is lifted by one of Falkor’s cranes and precariously dangled over the dock while the calibration is being performed. Second Officer Oli skillfully handled this operation. They can’t just tilt the instrument while sitting on the dock because there is metal in the cement of the dock that would also interfere with the compass.

Another element of the calibration process is testing the ship-mounted ADCPs that reside on the bottom of Falkor’s hull. Falkor is getting help calibrating the data from collaborators at University of Hawaii – remotely! This quality control will be conducted by UH researcher Jules Hummon from her office at the School of Ocean and Earth Science and Technology on the UH Manoa campus, over 5500 miles away. Now that’s global science.

The instruments that measure temperature, density and conductivity on the CTD are each calibrated in the laboratory (where they were built) every year using known standards. But even when everything is calibrated, field work in the middle of the ocean is still tricky because water, salt, and pressure are never good for electronic equipment. For example, on the first CTD cast yesterday, the readings (unlike the ADCP, these are sent directly to the science control room via a cable) were all over the place (lots of horizontal lines on the plot), so the rosette had to be pulled up again to re-check all of the wire terminals. Something was not talking to something else properly. Another challenging element was getting the ballast correct because large swells as occur in the Tasman Sea can put a lot of stress on the cable and cause the rosette to bounce. But once the terminals were reconnected and the weight was corrected, the CTD was lowered again and everything seems to be going swimmingly.