We’re currently hovering close to the northern site as we prepare to deploy moorings T1 and T3. A perfect storm (dare I say it) of high winds and choppy waters forced us to abort Friday’s deployment shortly after we threw the upper float of mooring T1 over the side.

The wind was howling at 36 knots at the start, and unexpectedly picked up to 45 knots within 10 minutes of beginning the deployment. The winds overloaded the ship’s autopilot and caused us to drift slightly off station. This sent the float, still attached to the boat, around to starboard, potentially entangling it into the propeller and losing the float and instruments. Captain Tom Desjardins and the ship’s second mate, Heather Galigher, quickly killed the propeller nearest to the instruments and maneuvered the boat into position using the remaining propeller. Our team on deck, led by Eric Boget, jumped into high gear and successfully recovered the mooring in a heroic feat of expertise, strength and precision. 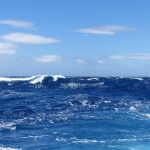 Winds howled at around 45 knots on Friday as we attempted and then aborted mooring T1. Credit: Julia Calderone. 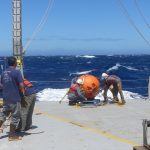 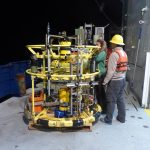 This cage is called the Rosette. It contains multiple instruments and is lowered over the side of the boat to probe water properties from the floor of the ocean to the surface. Credit: Julia Calderone. 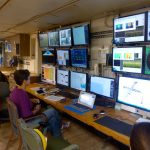 Sonya Legg monitors incoming data from the Rosette as it is yo-yo’d from the surface of the water to the ocean floor over and over again. Credit: Julia Calderone. 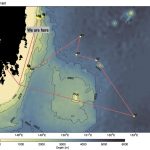 This is our current location.

Continued 30-plus knot winds prevented mooring deployments yesterday. Since then, we’ve been yo-yoing scientific instruments to the bottom and back, measuring velocity, density and turbulence, in search of the perfect location for the next mooring deployment.