Years, months and days of planning are finally coming to a head as we continue our fourth day dropping instruments into the water. A storm is coming, so we’re racing to deploy as many moorings as we can before the seas turn angry.

Nevertheless, morale is running high from the excitement of pulling off such a finely-tuned collaboration between various teams, including scientists from Scripps Institution of Oceanography, Oregon State University, University of Washington, University of Alaska Fairbanks, Geophysical Fluid Dynamics Laboratory (GFDL), and Princeton University. This intricate coordination effort is really what has made this massive data-gathering expedition possible. We’ve been ordering, organizing, refurbishing and programming the proper components for months, and we’re relieved to finally see our hard work pay off.

We have deployed four moorings so far, with the fifth on the way. The first was the most complicated, with about 50 instruments attached to three miles of line. All fifteen of the moorings we’ll eventually drop into the ocean contain hundreds of instruments that will measure ocean properties including temperature, depth, salinity and water velocity. We also have a handful of highly specialized and unique instruments that directly measure turbulent mixing.  These synchronized measurements will help us decipher the patterns of tidal energy propagating from the Macquarie ridge south of New Zealand and partially reflecting off of Tasmania.

Up until now, we’ve mostly been working in deep water off shore. Today we’re heading back toward the continental slope to begin analyzing the underwater waves that are breaking against it. As these waves break onto the slope, they release some of their energy into energetic turbulent mixing.  Our goal is to map the extent of turbulent mixing at the slope, where this mixing occurs, how strong it is and what’s producing it. Stay tuned for more. 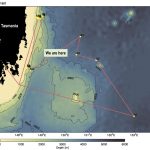 We are currently at this location. 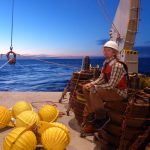 Samuel Fletcher sits among a gaggle of glass balls enclosed in yellow plastic. These spheres provide buoyancy to the mooring. Credit: Julia Calderone. 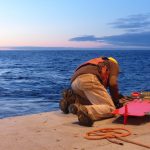 John Mickett attaches an instrument that acts as a weather vane to the mooring line. The propeller points in the direction of water flow to tell us how fast the water is moving. Credit: Julia Calderone. 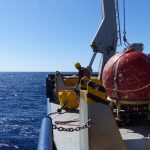 John Mickett prepares to launch the first element of mooring number one; a beacon that will eventually tell us where it is for retrieval later. Credit: Julia Calderone.